April 30: Morrison (6) and course conclusion. Does Beloved have a happy ending? Three scholars on this question: the motives and the arguments of Alexandre, Berger, Love.

Alas: it’s the end! Refresh your memory of the whole with the list of principles.

April 26: Morrison (5). Explanations (or non-explanations) of the killing, continued. And: are ghosts real? The question of supernaturalism in Morrison. The monologue sections and the transformation of style in the novel.

See the Morrison (3) handout for a key remark by Morrison on the issue of “magical realism.”

April 23: Morrison (4). The multiple explanations or understandings of the death of Sethe’s child. Compare Auerbach on Woolf’s “multipersonal” method.

April 19: Morrison (3). Transforming historical source materials and the question of focalization, once again. What is to be done?

April 16: Morrison (2). Who narrates the past in Beloved? Introduction to realism (and beyond).

April 12: Morrison (1). Putting Woolf and Morrison in literary history: the idea of the literary-historical period. Continuities and transformations from 1927 to 1987. Technique, subject matter, genre.

Good basic background on Morrison can be found on the part of the Swedish Academy website devoted to her 1993 Nobel prize.

April 9: Woolf (4). Killing the Angel in the House and the death of Mrs. Ramsay; gender, narrative technique, desire; the meaning of Lily’s painting.

The image of the Vanessa Bell portrait of Woolf shown in class: 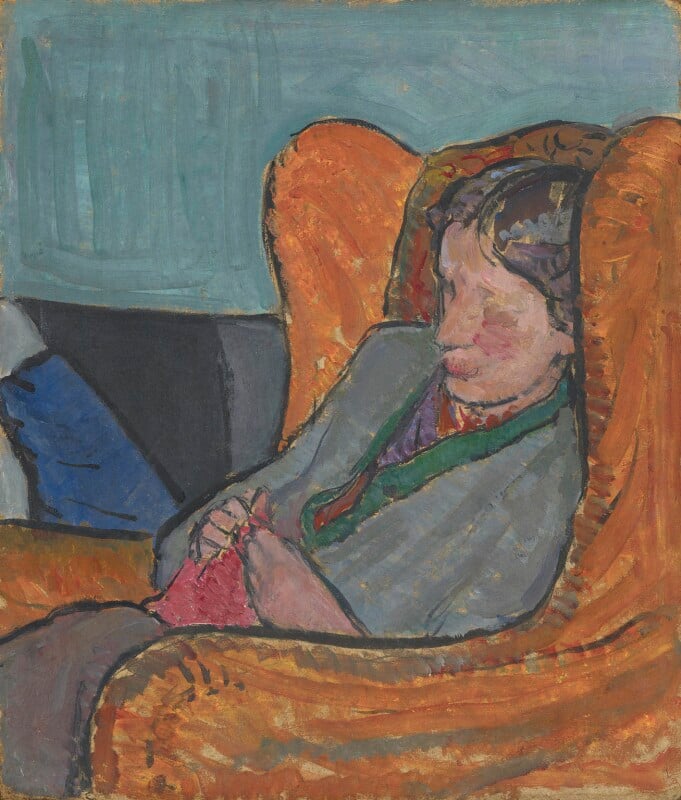 Bell also designed covers for the first editions of many of Woolf’s novels (which Woolf and her husband printed on their own press): here is her dust cover for To the Lighthouse:

Due Sunday, April 8, at 5 p.m. in advance of class: Exercise: Responding to Scholarship. Submit on Sakai and bring a hard copy in.

Our discussion of James’s style on March 5 was somewhat incomplete, and I meant to return to it and summarize it on the 8th. We were unable to hold class that day. I have written up some extra notes, with even more detail than I could have given in class, here: More on James’s Style. These notes include my best effort at a full syntactic tree diagram of the single Jamesian sentence we analyzed on March 5. I also formulate there some principles for stylistic analysis:

1.8 For literary studies, the style of a text is a crucial dimension of its meaning; style is not separable from “content.” The way a text uses the linguistic medium—the way words are arranged and convey meaning—bears both on its generic status and on its specific significance.

1.8.1 The sources of style are many and layered: style may be analyzed as characteristic of a single speaker within a text, of a single text as a whole, of an author (who may have a signature style), of a genre (the formal characteristics of a genre may include a certain kind of style, in which case we speak of linguistic register), of a literary movement, of a social group, or of a historical era.

1.8.2 An analysis of style requires careful attention, at a minimum, to syntax and to diction, sentence by sentence: literary studies considers grammar and lexicon as resources used by texts.

1.8.3 Style also encompasses patterns in the pragmatic effects by which a text conveys meanings not explicitly stated at sentence level. Some of these effects are described as rhetorical figures (metaphor, irony, understatement, hyperbole); others have no widely used names but may be analyzed in context as a relationship between sentence meaning and discourse meaning.

Due March 5: Exercise: The medium of prose. A page on an adaptation of Dickens, to be submitted on Sakai by 10 p.m.

The film clip shown in class was from The Muppet Christmas Carol, dir. Brian Henson (1992).

February 26: Dickens (1). Questions of genre, characterization, and narrative voice. The second side of the handout has both an image of the original 1843 title page and an excerpt from a preface Dickens added later when he included the Carol in a collection of his Christmas Books.